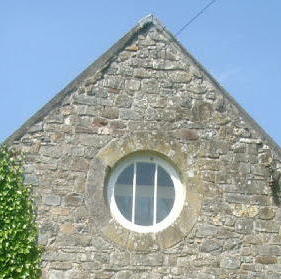 Our aim is to make the very best round wooden window frames at a reasonable price.  They aren’t cheap but they are extremely good value.  From my experience of replacing rotten frames I knew that the joints developed over the centuries for square windows just did not work for round windows.  I looked at window manufacturing techniques from around Europe.  I realised that if I followed the lead of Sweden, Denmark and Germany, and laminated my frames, they would be much stronger and much more durable. I made more prototypes than I care to remember, but now each frame is assembled from a surprisingly large number of precisely machined components.  I have a German computer controlled machine that cuts each component to an accuracy of a few thousandths of an inch.

My opening windows consist of an outer frame, which is fixed into the opening, and an inner frame that pivots about a horizontal axis, rotating right round through 180º so that the outside can be cleaned from the inside.  Each frame is made up of three layers of wood.  I carefully select each piece of timber, rejecting any knots or defects; each layer has eight segments finger jointed together.

The finished blanks look like the image to the left, but as they are machined for the final time, a satisfyingly elegant frame emerges on the bed of the machine.  It is like a butterfly emerging from a cocoon, but I cannot afford to get too carried away, because one small mistake at this point can ruin several days’ work.

Once the glue in the finger joints has cured, I machine the eight segments to produce a flat circle which becomes one of the three layers that make up the frame.  When I have three circles I glue them together to make a blank, from which I will eventually machine the finished frame.